Giambattista Nolli (1701-1756) was an Italian geometer and architect. He is widely known for his iconic masterpiece, "La Nuova Topografia di Roma" (the new topography of Rome), which he published in 1748 after 12 years of surveying and engraving, a detailed representation of Rome inside the city walls, on 36 sheets, 12 of which contain the map. The assembled map measures about 3.5 square meters (176x208cm). The work also includes a scaled down version of the map on 1 sheet, the so-called "small Nolli plan", which was produced with the help of Giovanni Battista Piranesi and published together.

This website is collecting information about the Nollimap. If you want to contribute to this effort, for suggestions and contributions, feel free to get in touch.

Giambattista Nolli, also called Giovanni Battista Nolli, was born on April 9, 1701, in Montronio di Castiglione d'Intervi, a hamlet 20km north of Como in Lombardy. His parents were Carlo Nolli and Caterina Solari. Grown up, he moved to Milan where he worked as a surveyor on the compilation of the cadaster, a position where he became acquainted with the latest survey methods and techniques. In Milan he met the abbot Diego Revillas, who was an astronomer and mathematician at the university La Sapienza in Rome. With the help of Revillas he moved to Rome where he was introduced to the scholarly circles that gravitated around the influential Albani and Corsini families.

In 1736, together with his son Carlo Nolli, he started working on a modern and detailed map of Rome (Rome maps of the time used to be oriented to the east and often showed the city in axonometric view). Initially they self-financed the work but were able to attract the interest of the cardinal Prospero Lambertini who in 1740 succeeded Clement XII and became the 247th Pope under the name Benedict XIV. Lambertini commissioned them to finalize the map and provided wide-ranging authorization which allowed the group to conduct their surveys also in private properties such as monasteries, gardens and vineyards. They gathered a larger group of professionals, one of them the young Venetian Giambattista Piranesi who joined the group in 1740. Nolli published his map in 1748 with a dedication to the commissioner, Pope Benedict XIV.

As an architect, Nolli designed the reconstruction of the church Santi Bonifacio ed Alessio on the Aventine hill in 1743 and led the refurbishment of the medieval church Santa Dorotea in Rome from 1751 to 1756.

Giambattista Nolli died on July 3rd, 1756, in Rome. He lies in Santa Dorotea at the base of the altar.

Dedication to Benedict XIV on the New Topography of Rome 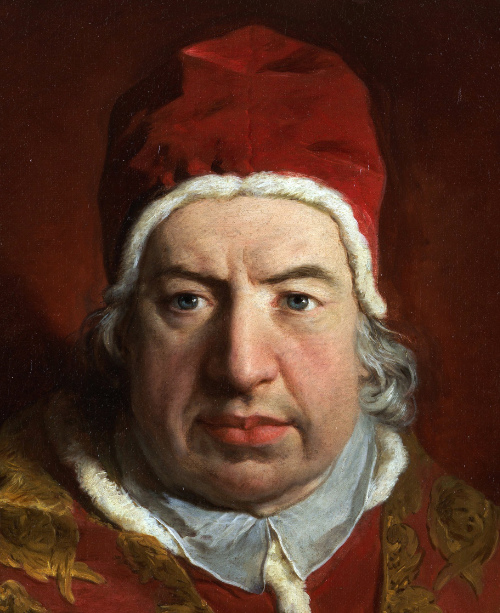 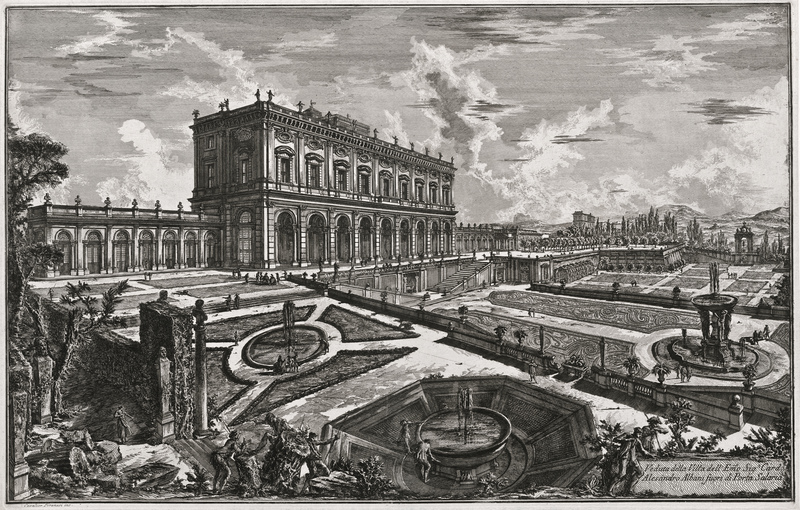 Nolli has published 2 versions of his map, the Pianta Grande consisting of 12 large map sheets (each 80x54cm), the two indices, a short legend and a reduction of the map on a single sheet, the small Nolli plan, simply called La Topografia di Roma, which you can see here.

The Biblioteca Hertziana in Rome provides a zoomable photograph of the assembled and framed map. 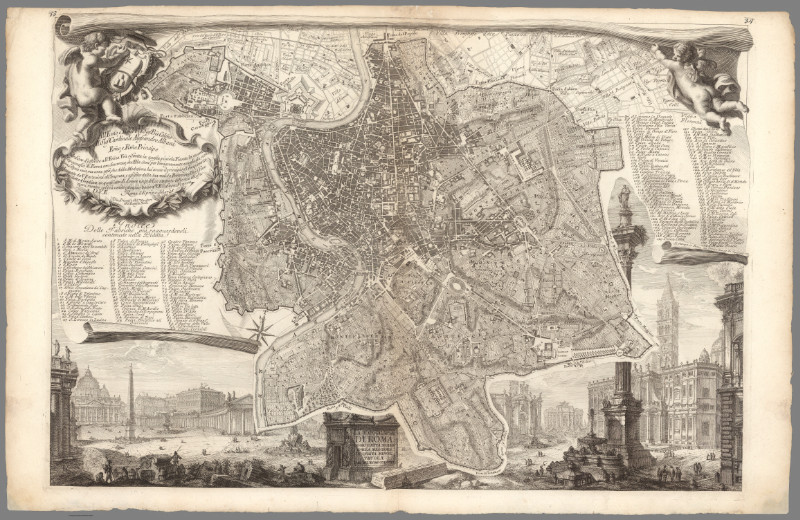 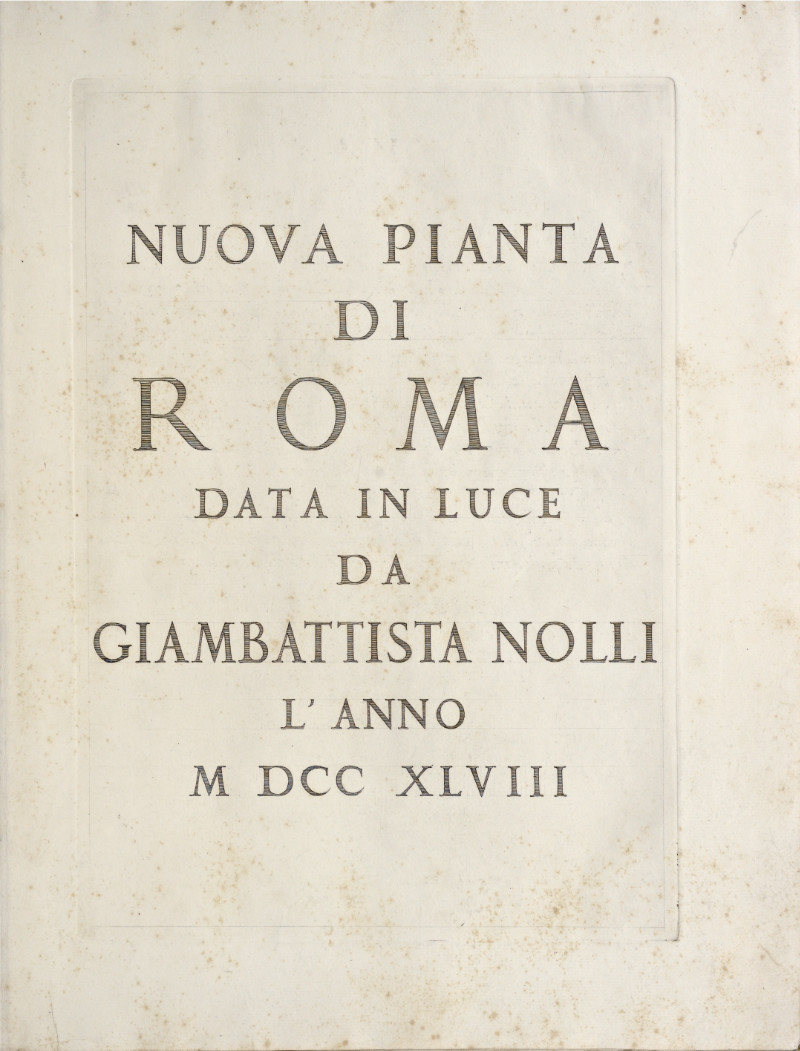 Title page of the Nuova Pianta di Roma, click to open the pdf

The index for the Nolli map

This is the Nuova Pianta di Roma with the pages that make up the map indices, the 12 individual map sheets of the Pianta Grande and the small map on one sheet. It was published in 1748 by Giambattista Nolli. The original publication consists of 36 printed sheets, where the pages opposite the index pages and the backsides of the maps have been left blank. In the copy you see here, these empty pages have been removed.

Nolli App for iPhone and iPad

Nolli App is a modern version of the original map by Giambattista Nolli. It contains the 12 original map sheets, assembled and digitally remastered in one seamless composition, georeferenced to enable the comparison with the current situation. The app allows to navigate with the historic map in the contemporary city, explore and discover the hidden gems.
The app provides both original indices, in form of an assembled image of the sheets and as digital data, all map labels have been digitized as well, and everything is accessible through the search. The content is available for offline use in high definition.

The University of Oregon, lead by Jim Tice from the Department of Architecture and Erik Steiner from the Department of Geography, consulted by Allan Ceen from Penn State/Studium Urbis, has published a great website about the Nolli Map. The site offers a seamless digital version of the map and features articles about the cartography, natural features and landscape elements, social factors and architecture and urban design. 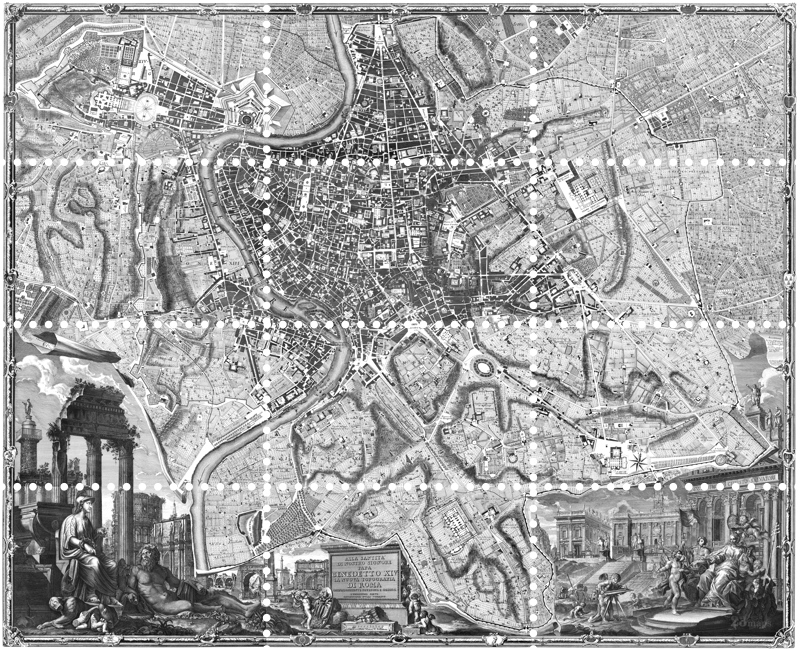 A selection of videos

Nollimaps as a modern tool

Generations of architects have used nollimaps (or figure-ground diagrams) as tool for analyzing the space and understanding urban structure. Through omission of everything but buildings, the spatial configuration and the relationship between builtup and unbuilt space can be studied more easily. For decades this was tedious and time consuming work, but with the rise of open data and the global availability of building footprints it is now possible to create a nolliplan with the push of a button (needless to say one should not expect the graphical quality of the historic original). 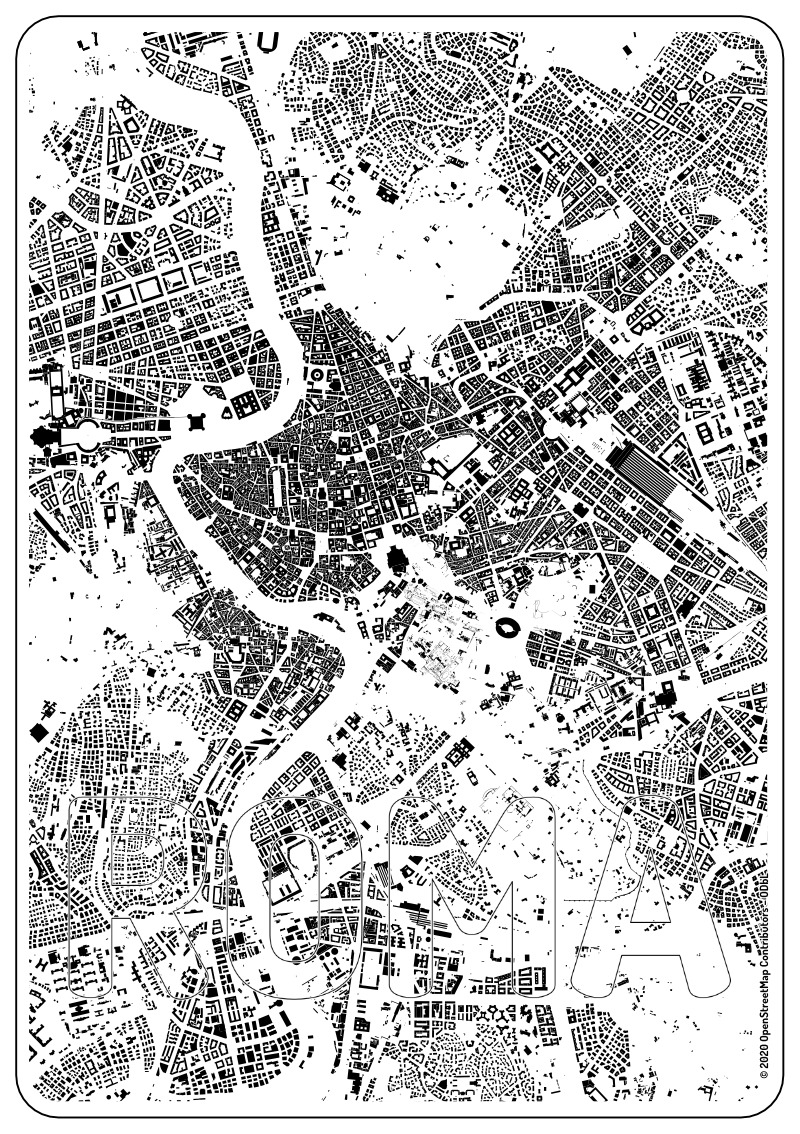 A modern nollimap of Rome, courtesy of 23maps.it, data © by OpenStreetMap contributors